What is an ASA citation generator and how can it help you?

Getting citations and reference lists correctly done can be very confusing and time-consuming.

The ASA Style Guide provides rules and guidelines on citations, and is mainly based on the Chicago Manual of Style.

The good news is that our ASA citation generator can do it automatically for you and it is FREE to use! 🎉

Not convinced yet? Here are 5 reasons why you are going to love the BibGuru ASA citation maker:

🎓 ASA, APA, MLA, Chicago and thousands of other citation styles

With BibGuru we have made a citation tool that truly helps students to focus on the content of their work instead of worrying about how to get their reference list correctly done.

If you need to know more about ASA citations check out our How do I cite in ASA style? section.

Why, when, and what do I have to cite?

Why
The broad scientific knowledge we have today is the accomplishment of many researchers over time. To put your own contribution in context, it is important to cite the work of the researchers who influenced you.

Cited sources can provide key background information, support or dispute your thesis, or offer important definitions and data. Citing also shows that you have personally read the work.

When
In addition to crediting the ideas of others that you used to build your own argument, you need to provide documentation for all facts and figures that are not common knowledge.

What
The number of sources you cite in your work depends on the intent of the paper. In most cases, you will need to cite one or two of the most representative sources for each key point.

However, if you are working on a review article, the aim is to present to the readers everything that has been written on a topic, so you will need to include a more exhaustive list of citations.

What is the ASA citation style? 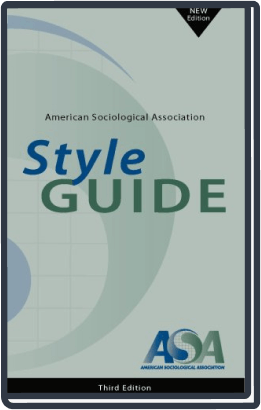 But it has been widely adopted by sociology departments as a guide for the preparation of theses, dissertations and other types of research papers. Nowadays it is also used by professional writers and publishers of scholarly materials on sociological or social science issues. The ASA Style Guide is primarily based on the Chicago Manual of Style.

The ASA style uses the author-date system for in-text citations (parenthetical referencing style) and a complete list of references cited at the end of an article, before any appendices. This guide will help you learn the basics of the ASA style and is based on the fifth edition of the ASA Style Guide.

How do I cite in ASA style?

The author-date system used in the ASA style is based on the Chicago Manual of Style, which includes a brief text citation (enclosed in parentheses) and a complete list of references cited (included at the end of an article, before any appendices).

Citations in the text include the last name of the author(s) and year of publication. Include page numbers when quoting directly from a work or referring to specific passages. Identify subsequent citations of the same source in the same way as the first.

How do I create my reference list in ASA?

This is your reference list entry for a book

This is your reference list entry for a journal article

While all the specific rules of the ASA citation style might sound very complicated, you don't need to worry about getting them wrong with BibGuru.

Use our ASA citation generator above to create the fastest and most accurate ASA citations possible.

🚴‍♀️ What does the BibGuru ASA citation generator do?

The American Sociological Association (ASA) is used in the field of social sciences. Therefore, students of sociology, and similar fields, are the ones who the BibGuru ASA citation generator.

🎰 How does the BibGuru ASA citation generator work?

You can create a reference in the BibGuru ASA citation generator by entering the URL/title/doi or any other identifier of your source into the search box, choose a category, click enter, and that's it. You have a 100% correct reference in ASA style.

🐟 Are ASA and APA style the same?

ASA is the citation style from the American Sociological Association, while APA is from the American Psychological Association. The ASA Style Guide (currently in its fifth edition) is primarily based on the Chicago Manual of Style and uses a brief text citation (enclosed in parentheses) and a complete list of references cited at the end of an article.

📚 Does the ASA style need a title page?

The ASA Style Guide recommends a title page for all papers. The title page should include the full title of the article, the name(s) and institution(s) of the author(s) (listed vertically if more than one), a running head, the word count for the manuscript (including footnotes and references), and a title footnote. An asterisk (*) following the title can be used to refer to the title footnote at the bottom of the page. This footnote includes the name and address of the corresponding author, acknowledgements, credits, and grant numbers.

ASA style uses the author-date format for in-text citations, based on the Chicago Manual of Style. When citing in-text, add parentheses with the author's last name and year of publication. You can also add a page number after a colon, with no space between the colon and the page number, e.g.: .. Orol (2010:1).

🏄‍♂️ Is the ASA style double-spaced?

Yes, in the ASA style, all text including your abstract, references, footnotes and acknowledgements, must be double-spaced. Only block quotes may be single spaced.

💬 Does the ASA style have a running head?

A running head is a shortened form of the title of your paper appearing on the top left header of every page of your manuscript. The words "Running head:" appear on the title page, but not on subsequent pages. It should use the Times New Roman font, be double-spaced, and no more than 50 characters.